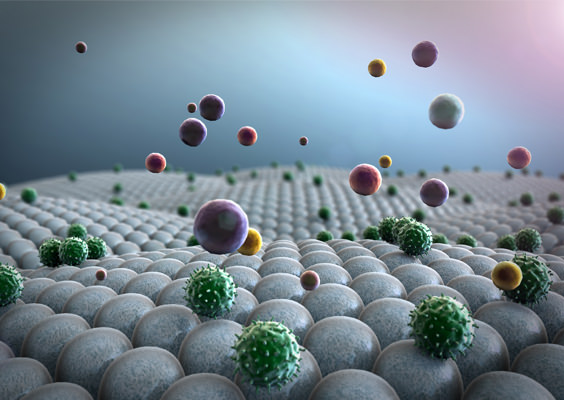 You were born with all the defenses your body will ever need. It’s called your immune system. And if you keep your immunity strong you never have to worry about any disease.

But sadly, your immune system declines with age. That opens the door to chronic diseases and other conditions linked to aging. These include everything from infections to cancer. That’s why one of the best anti-aging plans I use with my patients is boosting their immune systems.

In a minute, I’ll show you how you can flip the switch on your immune system. But first, let’s talk a little bit about how your immunity operates.

Your natural immune system relies on an army of defenders. These guards are made up of various kinds of white blood cells. They include:

In a healthy immune system, all of these cells work to fight off disease and infection. But an old or weak system allows invaders to flourish and destroy your health.

Today, I want to tell you about an exciting, new technology that can help you regain the robust immune defenses you had in your younger days.

This treatment has nothing to do with surgical lasers, which are used to cut, cauterize and burn out diseased tissue.

I’m talking about soft lasers that operate at lower power. Instead of destroying tissues, they repair them. Soft lasers have been used to help heal:1,2 Boosting the body’s immunity naturally speeds up the healing of burns. In one study of 95 burn patients, IV laser therapy was added to other treatments. It helped reduce complications from 26.4% to 16%. And it helped cut death rates from 16% to 3.8%.6

Besides boosting the immune system, IV laser therapy has also been used in cases of:

And the great thing about this therapy is that it’s as fast and painless as a blood test. I use it myself. Here’s what happens… A tiny catheter is inserted in your arm at the vein in your elbow. The tip of the catheter has a small bulb that emits a special laser beam. In about 10 minutes, all the blood in your body circulates past the beam.

As the blood flows past the laser light, it becomes radiated with a certain wavelength. Different wavelengths have different colors and may appear red, blue, green or yellow.

And this beam glows so cool, it can’t damage any healthy cells.

When I tested IV laser therapy on myself I felt great. I was hyper-alert and brimming with energy. I was more focused and clear-headed than I’ve ever felt in my life.

For best results, I recommend getting sessions once a day or every other day, for a total of three to 10 sessions.

Here at the Sears Institute for Anti-Aging Medicine, we’re excited to be able to offer IV laser therapy. Just call my staff at 561-784-7852 for details. Or you can visit my website at www.searsinstitute.com.

3 of My Favorite Natural Sex Boosters
We use information collected through cookies and similar technologies to improve your experience on our site, analyse how you use it and for marketing purposes.
Privacy Policy

We and our partners use information collected through cookies and similar technologies to improve your experience on our site, analyse how you use it and for marketing purposes. Because we respect your right to privacy, you can choose not to allow some types of cookies. However, blocking some types of cookies may impact your experience of the site and the services we are able to offer. In some cases, data obtained from cookies is shared with third parties for analytics or marketing reasons. You can exercise your right to opt-out of that sharing at any time by disabling cookies.
Privacy Policy
Allow all

Facebook Conversion API Events (CAPI) help us better understand how you interact with our websites. They allow us to measure the impact of our ads on the website's conversions and they improve ads targeting through custom audiences. When possible, we might share with Facebook information like name, email, phone, address.
Confirm my choices Allow all